When people in Muskoka tells their Architect that they want a cottage designed in the “old Muskoka style”, they usually mean in a style that was made popular in the Victorian era. 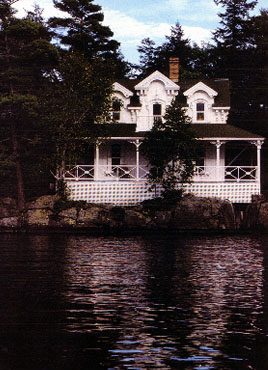 Just as the predominate culture of North America was English in origin during the Victorian era, English architecture was so important across North America that it became called “Victorian Architecture”. However the term “Victorian architecture”is actually meaningless without further descriptors, as it takes in many different styles that were created during this period.

The favour with which scientific discoveries of the industrial era were received, made people ready for and open to change, having great appreciation for all that was newly created or modern. It became popular to have a home created in a manner that was unique to you, not following a rigid pattern as had been practice in the past. For this reason, Architects of this era did not require any restraint as they festooned their creations with influences from nature, history, geometry, and exotic designs seen in other cultures around the globe, experienced through England’s continued empire building. Improved technology meant that Victorian Architects had the opportunity to be unique and adventurous, creating very elaborate designs with excessive ornamentation. The favoured styles changed rapidly, with a new style coming into vogue about every twenty years. Many Victorian designs were a mixture of styles, making them difficult to categorize.

Many of the best local examples of Victorians styles belonged to wealthy merchants or the vacationing elite. Victorian retreats in locations such as Muskoka were an opportunity for wealthy industrialists and merchants to escape from the realities of their money. Over crowded cities, that had not been planned for the influx of multitudes of factory workers or the dirt and soot of the factories, were a place to be avoided, especially in the summer months when more time was spent in the out of doors. The wealthy took their families away from the city in the summer. These retreats were called different things in different areas. Out west they were referred to as “cabins”, in the American northeast they were referred to as “camps”and in Muskoka they were referred to as “cottages”[Note that the beautiful shingle style “Camp Vagabondia”on an island in Lake Muskoka was built, owned and named by an American family after their other vacation homes, hence the word â€˜camp’ in the name]

Across Muskoka’s towns and lakes you can find all of the Victorian styles that were made popular during this era. Because many were between styles or have different names in different locations, it is difficult to use a precise language in describing the style of a particular home or cottage. However the style names include:

Swiss Cottage Style-revived in popularity in the 50’s and 60’s across Muskoka, this style made the word “chalet”popular as well as the decorative trim that became known as gingerbread

Second Empire Style-sometimes called Regency because the very fashionable Prince Regent favoured this style, or Mansard because of the roof shape made popular by Paris architect, Francois Mansart, when designing for Napoleon

Stick Style-uses elaborate flat designs made of stickwork or half timbers to create trim sunbursts, latticework or columns, supplemented by knobs, spindles, bays, towers and gables

These styles can be readily seen by driving through the old sections of each of the local towns, taking boat tours around the lakes, or by reading any of the wonderful books about early Muskoka that our local authors prepare for us.