To understand the architecture of Muskoka, you have to look at the broader social, economic, political and philosophical context of Ontario and the United States over time. 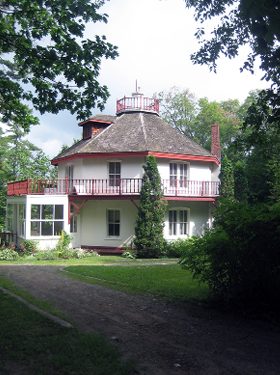 The guide book called “Well Preserved”by Mark Fram is one of many references that have been invaluable to me in understanding architectural style in Ontario. This book contributed immeasurably to my understanding and has provided the language to assist me to verbalize what my eyes have been collecting over the years.

Much of Ontario, including Muskoka, was founded during one of the periods of greatest economic, political and social upheaval the world had even known. Industrialization created an explosion of ideas, scientific discovery, and technological advancement which had major effects across society, including architecture.

The Victorian era, the years from 1837-1901 when Queen Victoria reigned, was the height of the Industrial Revolution. This period was characterized by the rise of positivism and rationalism. The birth of science as a discipline had a profound effect on Victorian thinking. They believed that all problems could be solved by scientific investigation and reasoning. Just as the laws of science began to eliminate diseases, Victorians believed that the laws of human behaviour could be determined and moral evils could be eliminated. This is the period that saw the beginnings of democracy, feminism, socialism and many other modern movements.

The birth of Science as a profession and the institutionalization of science into research universities and corporate laboratories, like Thomas Edison’s Menlo Park, rapidly accelerated the pace at which discoveries and innovations occurred.

At the same time, British Empire Building continued at a rapid pace. At one point nearly one quarter of the earth’s land surface was, to one degree or another, part of the British Empire. The rise of technology to develop rail travel facilitated Victorians traveling more than any other time in history. Between their ongoing competition for resources and markets around the world to provide wealth and expand the empire, and their work to spread railroads, Victorians traveled to the far reaches of the world and were influenced by the cultures and the architecture they experienced on their travels. These influences were incorporated into their architecture, and they filled their homes with eclectic collections of artifacts from their travels. There was a fascination with structures like Turkish Pavilions, Swiss Chalets, Chinese Pagodas and other such exotic designs. Victorians minds were fully open when it came to innovation in architectural design.

An excellent example of the rise of scientific thought affecting innovations in architecture was the phenomena of octagonal buildings. Orson Fowler was a man who embraced positivism and was experimenting to discover ways in which life could be improved through scientific discovery. He worked in the pseudoscience of phrenology, which was defining an individual’s characteristics by the contours of their heads. He lectured on topics such as using phrenology to assist in choosing a spouse.

He wondered why scientific advancement had created such little change in architectural design and he looked for ways to make radical changes in design for his own house. He developed the idea that a better house could be built using an octagonal design, as this design would be easier to let light in, and it would be better ventilated, making it a healthier place to live. Fresh air was thought to be the cure for many ailments in this period of time. Another advantage was that an octagonal home would be less expensive to build and easier to heat in the cold weather.

Fowler created a design/pattern book and as a result of his influence at least a thousand octagonal homes were constructed. These were predominantly in Ontario, Upper New York State, and the American Midwest. Because they were not widespread, any town that has an octagonal home cherishes it. Ontario had 45 octagonal homes, one of which is in Bracebridge.

We are fortunate to have a Fowler influenced octagonal house on the hill over looking the location of the old Bird Woolen Mill in Bracebridge. In 1882 Henry J Bird, owner of the Bird woolen Mill, commissioned the construction of his octagonal home, and named it Woodchester Villa , after his birth place in England. By this innovative choice Bird proved himself to be a forward thinker and risk taker. When questioned about his radical design he would joke that he needed a bird cage in which to keep his birds.

The design of Woodchester Villa is very close to that of the classic octagonal home. It is of “gravel wall”(poured concrete) construction, has a two storey verandah and has a belvedere on the roof. The word “belvedere”comes from the Italian for “beautiful view”and refers to any structure on the roof such as a turret, cupola or open gallery which is to take advantage of the view. The pleasing lines of an octagonal house lend itself well to the application of a wide range of architectural embellishments, although most octagonal homes were of Italianate design, with deep bracketed eaves. Woodchester Villa does not have the bracketed eaves, but is austere, as was prescribed by Fowler.

This property is open to the public in the summer months and is worth a tour if you have not seen it already.